The Three Year Vehicle Purchase Cycle is Dead and Not Coming Back, Even if Economy Does, according to AutoMD.com Survey

More practical consumers are getting used to older vehicles but are more scrupulous about service, with independent repair shops trumping dealership service centers for aging vehicles

Carson, CA – July 23, 2012 – Reports of the death of the two to three year vehicle purchasing cycle have not been exaggerated according to a new survey of nearly 4,000 car owners by AutoMD.com*.Three in four respondents agreed that buying a vehicle every two to three years is a thing of the past, and 78% now say that 10+ years (or until it dies) is the appropriate vehicle lifespan. Most telling is that over half say that a better economy would not change their habit of holding onto their vehicle for longer.

The survey indicates, furthermore, that the longer ownership trend is spurring consumers to seek out independent repair shops over dealership service centers.

The survey results confirmed other industry data showing an aging vehicle fleet on US roads: for the second year in a row, 60% of survey respondents say their primary vehicle has over 100,000 miles. Sixty-six percent plan to drive their primary vehicle for over 150K (or until it dies) and over half plan to rack up 75K more miles than on their previous vehicle. While the economy continues to be the number one reason for holding on to vehicles, vigilant repair and servicing also ranked highly. And, automakers might want to take note: of those planning to hold onto their vehicles for longer (the majority!), over 50% say they will be more influenced by practicality than style when purchasing their next vehicle.

"There is nothing surprising about the economy driving car owners to hold onto their vehicles for longer - our data has been showing this trend for the past three years; but what is most compelling is that longer ownership has become an embedded habit for car owners, regardless of what the economy does," said Brian Hafer, VP of Marketing at AutoMD.com. "This significant lengthening in the ownership cycle looks to be here to stay, and it's being supported by better made vehicles on the road, more choices for &#150 and information online about - repairing those vehicles, and a more scrupulous focus on service and maintenance."

An Aging Fleet on the Streets

Longer Vehicle Lifespan Not Just a Trend, but a Reality

While the economy has driven car owners to hold onto their cars for greater periods of time than ever before, the survey indicates that this is no passing trend. Forty-five percent surveyed report that their viewpoint on the appropriate lifespan of a vehicle has changed in the past five years: they now view vehicle ownership as a much longer-term proposition. Three in four respondents agree that getting a new vehicle every two to three years is the old model and a thing of the past. And the vast majority say the appropriate vehicle lifespan is more than triple that: nearly 80% consider it to now be 10+ years (or until it dies), with 93% saying 8 years or more (or until it dies). 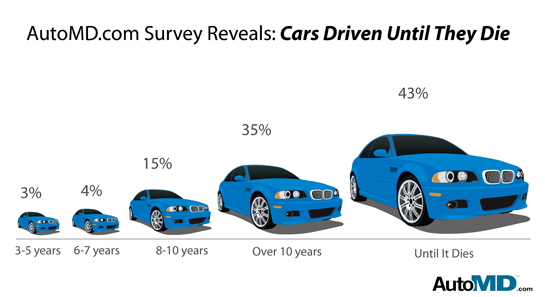 Significantly, of those who are more likely to hold onto their vehicle for longer, over half report that an improving economy would not spur them to shorten the lifespan and buy a new vehicle.

While half of those who are holding onto their vehicles longer say it has not changed their approach to service and maintenance, 57% of DFMers (Do-It-For-Me: those who usually go to a service center for repairs or maintenance) holding on to their vehicles longer say it has indeed changed their approach, making them more scrupulous about sticking to the manufacturer's recommended service schedule. Of those, the vast majority (76%) are more likely to visit an independent shop "to save money", versus the dealership.

When all DFMers (not just those holding onto their vehicles for longer) were asked which kind of service shop they were most likely to utilize, 69% said they would likely opt for the independent repair shop over chains (8%) and dealerships (20%). Meanwhile DIYers, who prefer their own garages for repairs (57%), also preferred independent shops (33%) versus chains (4%) and dealerships (6%).

Of the survey respondents, about 20% of DFMers and 13% of DIYers said they planned to purchase a new vehicle in 2012, with over half saying that they are purchasing simply because they have no choice, their vehicle is at the end of its life.

AutoMD.com™ (www.automd.com), a wholly-owned subsidiary of US Auto Parts Network, Inc., (Nasdaq:PRTS), is the most comprehensive and unbiased free online automotive repair resource designed to empower car owners with the best way to repair their vehicles. Backed by a team of automotive data specialists and certified auto mechanics who are advocates for the car owner, AutoMD.com allows both car owners and DIYers to 1. Troubleshoot car problems, 2. Know how much auto repairs should cost,
3. Understand the steps needed and the time it should take with How-to Auto Repair guides, 4. Find the right local auto repair shop at the right price for their issue, and 5. Get auto repair questions answered by the AutoMD.com community. AutoMD.com was named Best Automotive Website in the 8th annual American Business Awards, also known as the Stevie® Awards. AutoMD Mobile is available for the iPhone at iTunes.